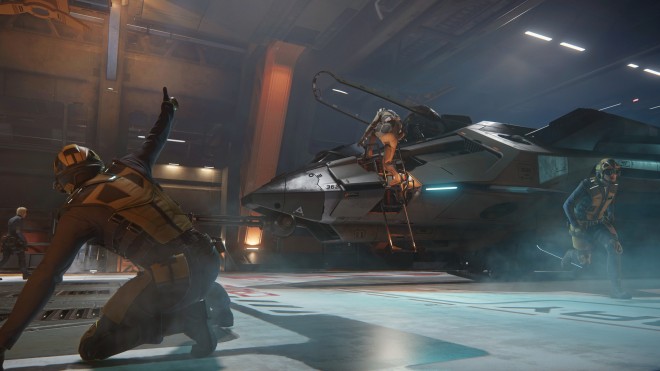 - Play for Free. Download the Star Citizen client and play for free during the Invictus Launch Week 2952 event. - Test-Fly Every Vehicle for Free. A total of 66 vehicles will be available for players to test fly for free, including the latest from the galaxy’s most respected manufacturers on show during the Invictus Launch Week 2952 event. - New Location – Orison Landing Zone. For the first time ever, Invictus comes to the Orison Landing Zone. Residing high in the sky of Crusader in the Stanton system, Orison is Star Citizen’s first cloud city. Built upon a military-constructed latticework of inhabitable floating platforms, it is the home of Crusader Industries large-scale shipyards. Loaded with the best amenities and conveniences the ‘verse, Orison’s breathtaking sunset and sunrise views will cast the perfect backdrop for Invictus Launch Week 2952. - Tour of the AEGIS Javelin and RSI Bengal Fly-By. During Invictus Launch Week 2952 one of the most powerful warships in the ‘verse, the massive Aegis Javelin will dock at Everus Harbor above Hurston, Baijini Point above ArcCorp, Port Tressler above microTech, and Orison itself. At each location attendees will be able access and tour interior parts of the ship. Invictus 2952 adds brand-new voice lines to the Javelin tour, sharing additional details about the UEEN’s mighty warship. Pilots will also want to keep an eye to the sky to catch a glimpse of the largest vessel in the navy, the RSI Bengal, as it will be viewable with its fleet throughout the Stanton System. - Anvil Legionnaire Boarding Ship Revealed. Sometimes, space combat requires a more face-to-face approach, and Anvil Aerospace delivers with the first boarding ship announced for Star Citizen, revealed during Invictus Launch Week 2952. The Anvil Legionnaire is currently available as a concept ship and will be added as a flyable ship in-game later. While the pilot controls the ship, their co-pilot is focused on hacking the target vessel. The Legionnaire has further seats for up to eight crew members and all the weapons and equipment they’ll need to pacify an enemy crew by any means necessary. Powerful shield generators, onboard distortion cannons, and heavy armor mean the Legionnaire is protected on approach to its target vessel. - RSI Scorpius. Making its in-game debut following its reveal in 2021, the RSI Scorpius will be available to fly for free during Invictus Launch Week 2952. The heavy two-crew fighter is one of the premier dog-fighting ships in the ‘verse, featuring heavy weaponry and tight handling, allowing it to easily compete against similar fighter ships. The ship packs more than just a punch; it’s equipped with multiple slots capable of housing lasers, projectile weapons, and missiles that combine for an impressive array of flexible frontward firepower, plus an innovative remote turret which moves along a track to provide full 360-degree fire coverage. With iconic folding-wing design and impressive firepower, the Scorpius is predicted to be one of RSI’s most popular vessels. - Drake’s Surprise. Drake Interplanetary are planning to reveal a new ship during this year’s Invictus Launch Week 2952. Prospective pilots from throughout the ‘verse are being encouraged to prepare themselves to “meet the beast” when Drake fully reveals their new vehicle on May 28.